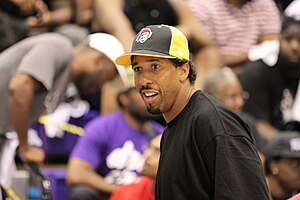 Andre Miller made a crafty reverse layup with 1.3 seconds remaining and finished with a game high 28 points as the Denver Nuggets fought off a feisty Golden State team 97-95 on Saturday.

Miller went right byÂ Warrior’sÂ rookie defender Draymond Green and banked in the shot to give theÂ Nuggets the go-ahead lead. Stephen Curry had one last heave before the buzzer sounded that was well off target ending the game.

The win was the 24th straight for the Nuggets at the Pepsi Center in Denver, and moves their overall record at home to 39-3.

Miller poured in 18 points in an action packed fourth quarter that involved plenty of drama at the end. Denver’s Ty Lawson stole the ball away from Curry and converted on the other end giving the Nuggets a three-point lead with 35 seconds to go. Curry, who set an NBA record with 272 made three-pointers this season then tied the game at 95 when he got Lawson to leave his feet on a shot fake and sunk a 2 from the dead corner with 14.5 seconds remaining.

Miller inbounded the ball for the Denver and got it right back and from there the rest was history.

The Warriors, the sixth seed in the West, playing in their first playoff game in six seasons, lost All-StarÂ David LeeÂ to a hip flexor strain in the fourth quarter when he banged into JaVale McGee. Lee finished with 10 points and 14 boards.

Klay ThompsonÂ led Golden State with 22 points and Curry had 19. Wilson Chandler had a great game for Denver stepping up for injured Kenneth Faried, finishing with 11 points and a team-high 13 rebounds and Andre Iguodala added 8 points, 1o rebounds, 5 assists, and 3 steals.

Game 2 of the series is scheduled to tip at 8:30 MT on Tuesday, April 23 in Denver at the Pepsi Center.