As the countdown draws closer to the coveted week off , the excitement of every student can be felt as we hear the words, â€œI canâ€™t wait for spring break,â€ more times than anyone cares to count.

So what do students do during this brief respite?

Families will be reunited, people will bless themselves with the concept of sleeping in, brains will be melted by a week of TV and/or video games. But many also turn their spirits to the wind, and choose to take this week to travel throughout the country and even the world.

We all go on vacation for many reasons. One of the most popular reasons is to go and experience a new culture, learn the history of another place. It can be incredibly interesting to walk through a museum or to take a tour around the oldest building in the oldest town in the country. One should be so lucky to even be able to see the biggest ball of twine in America (there are four claims to that title, just so you know, but thatâ€™s a whole other story).

But history and tours and museums arenâ€™t everything that you can do on a vacation.

â€œYou see one 300-year-old church, youâ€™ve seen them all,â€ said Brian Green, a Fort Collins native. â€œAnd honestly, staring at all those paintings just bores me. When I go somewhere, I want to get outside. I want to move and try things that Iâ€™ve never tried before.â€ 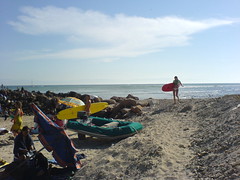 There are many destinations that people seek out purely to try new things.

â€œI was born and raised in Fort Collins, so last year when my girlfriend and I flew out to California for a week, we spent the entire week on the beach and my uncle taught us how to surf,â€ Green said. â€œIâ€™d never done it before and I absolutely fell in love with it. Now that was a vacation worth remembering.â€

Many people want to go on vacation just to get a chance to be athletic and explore the sports that they canâ€™t really do at their native lands. Lord knows how many Texans we have skiing in our mountains every winter.

â€œOur family is actually nearing the end of saving up for a big trip down to Peru,â€ said Eugene Thomas, a CSU student who grew up in Denver. â€œWeâ€™ve been saving up for about a year now, and this summer my [family] and I are going to be flying down to Peru for three weeks, and weâ€™ll be whitewater rafting for about two. This is the vacation of a lifetime, and I couldnâ€™t imagine anything being more fun than this.â€

As amazing as seeing the Louvre in Paris would be, some people just need to take a break from their world by doing something much more athletic. Like whitewater rafting or surfing. For some, a great vacation could be just strapping on a pair of reliable hiking boots and exploring our own backyard that is the good olâ€™ Rocky Mountains.

Get outside for your next vacation. Have fun. To quote a very successful American multinational corporation, â€œJUST DO IT.â€

For CSU liberal arts senior Jill Spencer, finding a ticket to fly home to Stockton, CA for the holidays is anything but relaxing.

â€œI have my last final on Friday then I donâ€™t really want to have to drive to the airport right after and I canâ€™t drive there and leave my car at the airport for a month during Christmas,â€ Spencer said.

She has to decide to wait and see if a roommate can drop her off on the way home or take the super shuttle.Â  This takes a lot of planning with departure times and ticket prices. However, this year airline ticket arrangements are not making holiday planning easy.

The price of tickets for this holiday season has gone up.Â  According to Jane Folsom, the owner of Destination by Design, the increase is 10 percent higher than last year. This mainly has to do with the availability of flights.

The airlines provide fewer flights to give the airline teams a break.Â  However, there has also been major airline consolidation since last year according to Folsom.Â  Continental and United are now one company.

â€œA year ago we had both Continental and United flying a fairly significant route structure,â€ Folsom said. â€œSo [now] in routes or itineraries where the airlines were competitive, we have only one.â€

According to Spirit.com, an airline new to the Denver area, the company is adding carry-on baggage fees as of Nov. 6. As of that date, general customers who reserve tickets will be charged $40 for their first carry-on bag at check-in.Â  This is up $5 from the current price recorded on the website.

â€œAnd if you donâ€™t pay for that carry-on piece of luggage as you check in, the charge is $100 [at the gate],â€ Folsom said.

There are ways to lessen these price add-ons as you look for a ticket.Â  The first is buying a ticket as early as possible.

For Spencer, looking early is the best strategy.

According to Folsom, flying into more regional airports helps the costs and availability.Â  Instead of flying into a small town, try looking at the bigger airports in towns surrounding the area.

â€œYouâ€™ll have more choices as far as carriers,â€ Folsom said.

This enables you as the consumer to compare extra chargers for each carrier.

Spencer flies Southwest Airlines because there are no baggage fees and the members club allows her to earn points for free flights.

Folsom warns against scheduling to fly home the Sunday after Thanksgiving.

â€œThe Sunday after Thanksgiving is by far the heaviest travel date of the entire year,â€ Folsom said.

Even though it cuts your travel short, she recommends looking at Friday or Saturday for flying home.Â  Another fix for this is flying to or from your holiday location on the actual day.

If you don’t want to go through the process of looking for flights yourself, you can use travel agencies like Destination by Design. According to Folsom, most travel agents charge a fee but they can save you time and some money.

â€œI would say that this is definitely a season and a year that, to get a better deal or the best deals that are available, you need to book as soon as possible,â€ Folsom said. â€œDo not wait.â€