Stephen Curry scored 22 of his 31 points in a spectacular third quarter, propelling the Golden State Warriors past the Denver Nuggets by a score of 115-101 to take a shocking 3-1 series lead over the number three-seeded Nuggets on Sunday night. 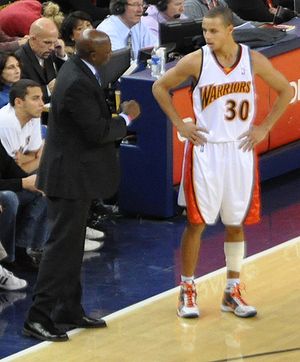 Stephen Curry taking instructions from assistant coach Keith Smart (Photo credit: Wikipedia)Curry hit 6 of 11 from the 3-point line and made all five or his free throw attempts along with dishing out seven assists for the Warriors who have now won three straight gamesÂ  in the series after dropping Game 1 on a last second layup by Nugget guard Andre Miller.

Jarret Jack, a player who only started a handful of games during the regular season, got another postseason start on Sunday and continued his great play dropping 21 points and recording 9 assists, while Carl Landry added 17 points off the bench for the Warriors who have received contributions from nearly everyone who has toed the court in this series.

Andrew Bogut may have had the biggest impact for Golden State early on in this game as he broke out for 12 points and 5 rebounds in the first half, including a posterizing dunk on Nuggets Center JaVale McGee.

The sixth-seeded Warriors are now just one game away from closing out the Nuggets and can do so on Tuesday night in Game 5 in Denver.

One of the big trends emerging in this series is the Warriors extremely high shooting percentage as once again they shot lights out from the field (55.7 percent) compared to the Nuggets (46.5 percent).

The Warriors have also taken complete control of the momentum in the series, which is surprising because they lost their top rebounder and best post threat in David Lee in Game 1 of the series due to a hip injury and Curry suffered an ankle injury in Game 2 and even got poked in the eye in the latter part of this game by Nuggets forward Corey Brewer.

Ty Lawson lead the Nuggets with 26 points and Andre Iguodala had 19. The Nuggets also turned the ball over 23 times and went just 6-20 from beyond the arc.