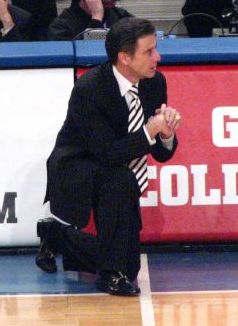 Louisville rallied from a 12-point deficit early to hold off Michigan 82-66 in the NCAA championship game Monday night.

Luke Hancock knocked down all five of the 3-pointers he attempted in the game and finished with a team-high 22 points for the Cardinals (35-5).Â This championship came on the same day head coach RickÂ Pitino was announced as a Hall of Fame class member and made Pitino the first coach to win national titles at two schools.

Both teams came in with big time stars who have shined throughout the tournament, but this night was ruled by the role players on both sides. Freshman Spike Albrecht exploded for 17 points in the first half for the Wolverines, hittingÂ four 3-pointers in a row at one point. Hancock then answered with four 3s of his own and Chane Behanan added 15 points and grabbed 12 rebounds to help spark the Cardinals comeback.

The other big storyline that emerged for the Cardinals during the tournament was the injury to guard Kevin Ware, a native of Atlanta who broke his leg in the team’s Elite 8 game against Duke. The fans gave Ware a big ovation when he had the net lowered to cut it after the game.

Trey Burke, the consensus national player of the year, led Michigan (31-8)Â with 24 points, but did not get enough help from his energetic big man Mitch McGary who was sadled with foul trouble and finished with just 6 points and 6 rebounds.

Albrecht’s heroic’s in the first half gave Michigan a 33-21 lead after Burke was sent to the bench with 2 fouls, but Louisville answered like they have all year long with a 16-3 run in about a 4 minute span to take the lead before Michigan hit two free throws to take a 38-37 lead at halftime, after which Hancock and Behanan took over to propel the Cardinals to the win.

Pitino’s first title came while he was the coach at Kentucky… he now has one just a little ways down the road in Louisville.