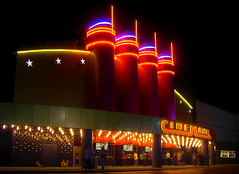 Three victims of the Aurora shooting have suedÂ Cinemark theater for a lack of security. These three victims, Denise Traynom, Brandon Axelrod, and Joshua Nowlan, were all injured and felt that theater security could have prevented their injuries. James Holmes, the shooter, was able to take ammunition in through a back exit he propped open without any notice.Â An Airlock Alpha article explains,

“There was no alarm activated during the many minutes while the gunman was stockpiling his arsenal, and inside the theater shooting people,” one of the two lawsuits claims. “There was no action taken by theater employees to safely evacuate the many people left in Auditorium 9.”

Both Cinemark representatives and attorneyÂ Christina HabasÂ decline opportunity to comment so far, according to EW.com. Despite these suits, the theater still plans to reopen by the beginning of 2013.