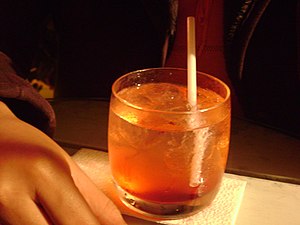 A drink called “Sex on the Beach”, is a very popular in peruvian bars. (Photo credit: Wikipedia)

Bars are loud, hustling and bustling places. Thereâ€™s loud music playing, itâ€™s crowded and most people have had a little too much to drink.

Still, going out is a great way to spend the evening, whether youâ€™re with your friends or stalking the opposite sex like a lion. But sometimes it can be so loud that it gets hard to hold a conversation with someone. When it comes down to it, itâ€™s all about body language.

Reading someoneâ€™s body language can be difficult, especially if theyâ€™re of the opposite sex. If you can read the message a person is trying to display prior to striking up a conversation with them, you are more likely to get lucky, in whatever way you interpret that.

It all starts when a guy sees a girl from across the room. Sheâ€™s so cute, laughing and dancing with her friends. Seems like she could be looking for a nice guy, right? Think again.

Whatâ€™s she wearing? A girlâ€™s bar outfit says a lot about what she is expecting to get out the night, especially her shoes.

Say sheâ€™s wearing heels; this probably means she is a single, available woman who would be thrilled to dance with you and maybe more. Sheâ€™s wearing a short skirt and makeup too? Even better.

On the other hand, say sheâ€™s like me and sheâ€™s in a relationship. I have what I thought was a fool-proof outfit for bars that would guarantee that I would look cute, but avoid getting hit on.

Iâ€™m a girl, so Iâ€™m going to wear a cute skirt and top just like everybody else because that is what society expects of me. But look at my shoes. I know itâ€™s dark in here, but look really hard. Notice they are moccasins. Do you really think I would be wearing moccasins to a bar if I was trying to meet a guy? No! My manâ€™s coming to pick me up at the end of the night, so donâ€™t bother.

You see, girls chose a specific outfit each night to display a message to guys.Â  If guys can read this body language, they will have more success.

On the other hand, Iâ€™m just going to come out and say it: men are easier to read than women. It happens. For example, if a guy is trying to look nice for the ladies, he wears what is notoriously known as the â€˜sexy shirtâ€™. This is basically anything in the ball park of a button up shirt with stripes or whatnot. Thatâ€™s it. Easy peasy lemon squeezy.

So say you have picked a girl; sheâ€™s wearing the traditional â€˜Iâ€™m looking for a manâ€™ outfit, so you decide you want to dance with her. Do not just walk up to her and start dancing without asking. Being forward can be good, but donâ€™t be so forward that sheâ€™s thinking â€œExcuse me, did I give you permission to rub that on my backside?â€

After asking to dance, take her over to the bar to talk and buy her a drink. WARNING: just because a girl lets you buy her a drink does not mean she is single. I get free stuff all the time. Itâ€™s just a perk of being a lady. It doesnâ€™t mean I like you or owe you anything in return.

If she is in to you, she will find random reasons to touch you, even if itâ€™s just your arm. Also, her eyes will be hooked on yours. You can tell a lot by eye contact. If she is looking back at the table where her friends are sitting or looking at her drink, sheâ€™s not enjoying the conversation.

Similarly, if a man is attracted to a woman, his lips will be slightly parted as he listens to her. He also might sit with his legs spread open and touch his face a lot. Itâ€™s a womenâ€™s job to make males feel nervous, and the reaction can be adorable.

So by now youâ€™ve been talking to this girl for a while. Sheâ€™s twirling her hair and youâ€™re making her laugh. Maybe itâ€™s time to give her your number?

Girls love a guy that can make them laugh, and a little bit of cheesiness never killed anyone. At this point if you write your number on a napkin with a little note that says â€œCall me, maybeâ€, youâ€™ve sealed the deal.