If my father taught me one thing about movies it was to love Arnold Schwarzenegger. There’s one thing Arnie understood before running California and has proven he still understands, it’s camp. The man knows what it means to not take himself too seriously.Â That’s an idea that permeated the action flicks of the 80’s and early 90’s, writing movies with ridiculous plots and characters on purpose, creating a movie that is aware of any faults and compensates for them by not compensating at all.

Think of Robert Rodriguez’s Planet Terror. Everything about that movie was camp, the script, the photography and the characters are all so heavily exaggerated that you can’t help but be in on the joke. The cast and crew all understood that leaving a movie that not only knows what it is but is actually pretty good.

This is the central problem with Expendables 2, no one is in it with the same goal in mind.

The first movie had the exact same issue, it wanted to be a big, dumb, silly action movie, 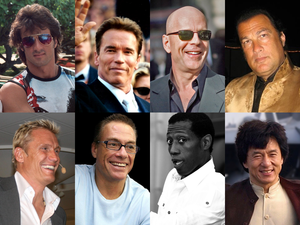 but half the actors and the crew seemed to think they were making a straight-faced film. This skew between goals is best summarized in Stallone’s performance, he’s trying so hard to be Rocky instead of Judge Dredd. It’s a serious issue because as the protagonist Stallone sets the tone of the story, so while everyone else in the cast is having fun, relaxing and giving seemingly decent performances Stallone is fighting the cohesion of the cast tooth and nail. Every other character spends most of the film either joking or murdering people with an ear-to-ear grin, but Stallone spends the whole film fighting all the relaxed, funny camp the movie tries to have.

This movie was sold as a gathering of the â€œbestâ€ action stars there are, but it doesn’t seem content bringing actors as a joke and just having them act. Willis and Schwarzenegger make jokes about their previous work. Which works and is actually rather funny, it could have been a lot less blatant, less of an, â€œI’m staring at the camera referencing the Terminatorâ€ moment more of a subtle joke , as it is it just felt really shoe-horned and, frankly, lazy.

I had a feeling his appearance would be as much of a joke as his name is on the Internet. I didn’t give the screenwriters enough credit, Norris enters to the theme from The Good, The Bad and The Ugly, walking the slow motion walk, makes reference to his meme status, and leaves again until the finale. More confusing than funny overall.

I feel like there’s a cut of this movie that knows what color is and how to use it. At no point is anything colorful or fun, but anytime a gun is going off there are buckets of blood being spilled. This is where Planet Terror succeeded, it was colorful and insane so that when the gore gets out of control it’s funny and plays into the campy elements of the film overall. Expendables’ fascination with gore in combination with its gloomy morose color scheme is just odd. The only color that’s on display is red, and it fights the entire washed out Saving Private Ryan-esque gray Expendables tries to have leaving the action scenes aesthetically morose but psychotically bloodthirsty.

Special mention to the screenwriter for deciding to crack jokes about Dolph Lundgren’s masters in chemical engineering, and a couple scenes later painting him as a shy nerd-type. Which was actually legitimately pretty funny. Also to Jet Li who’s in the movie for the first 10 minutes, has an excellently choreographed fight before he leaves the plot, never to be seen again.

Overall The Expendables 2 is upsetting for a very simple reason, there’s plenty of talent that could have easily worked together to make the action movie the 80’s would’ve been proud of. Instead we’re left with a barely mediocre sequel in what will almost surely be a mediocre trilogy.